Error: Your upload path is not valid or does not exist: /home/content/p3pnexwpnas20_data02/59/2823759/html/wp-content/uploads Rangeland Fodder Flow Planner App (Android and iOS) - Namibia Rangelands
Skip to content
+264 81 604 5878rangemonitor@gmail.comMonday – Friday 8 AM – 5 PM 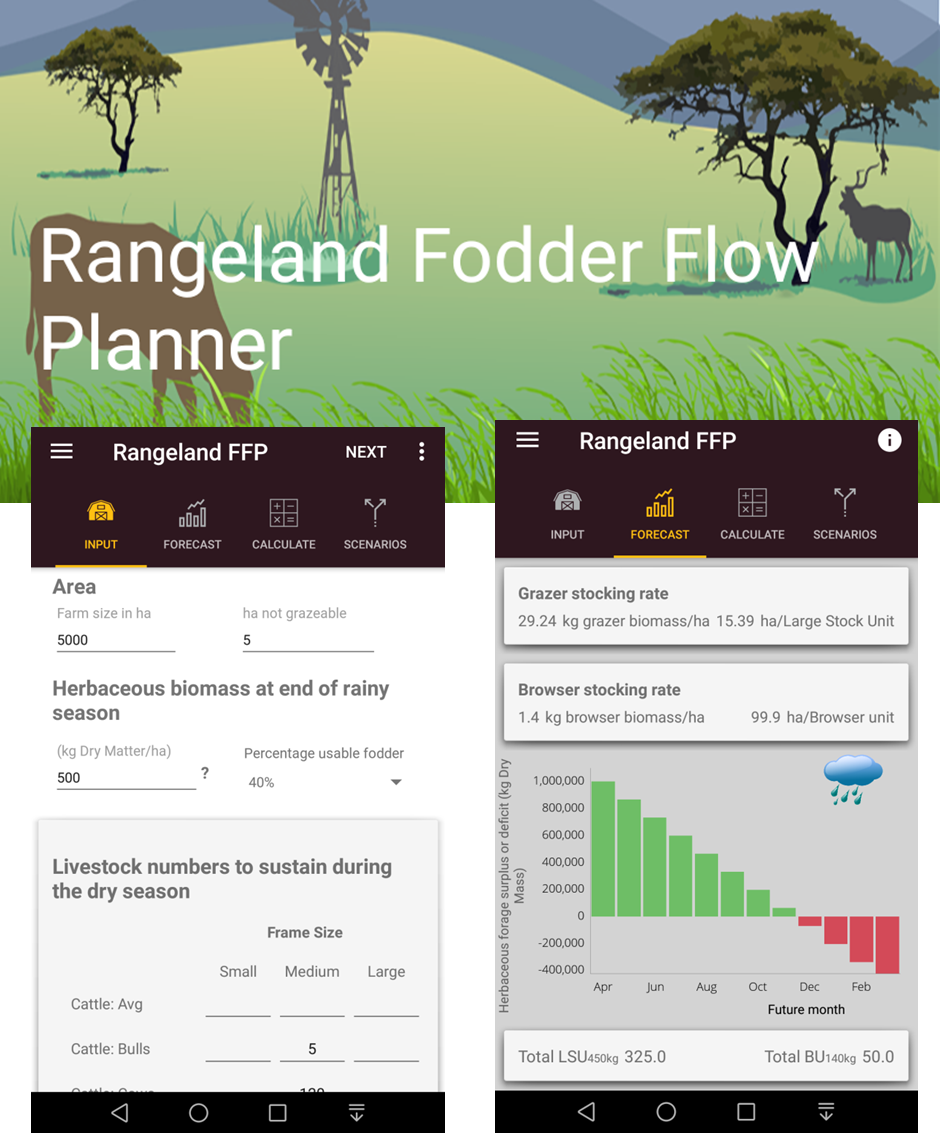 The Fodder Flow Planner is a simple tool designed to aid rangeland users in southern African drylands to annually set realistic livestock and game stocking rates. In the App the user specifies the size of the land, estimated herbaceous biomass available at the end of the rainy season and the current numbers of livestock and game using the land. The output is a graph forecasting the fodder depletion rate over the dry season. A predicted fodder shortfall before the end of the dry season serves as an early warning that the fodder demand by the current animal numbers are likely to exceed the fodder supply, while a good overlap of forecasted fodder availability and the expected start of the new growing season indicates sufficient or surplus fodder supply. The tool is specifically designed for grazing animals, but also calculates the browsing component’s stock rate.

The Quarterly Average Vegetation Condition Index compares the VCI for a longer 3 month period. This is calculated by expressing the current 3 month period’s mean NDVI relative to the maximum and minimum values for the corresponding 3 month period recorded over many years. A value approaching the minimum (‘severe’) indicates that the current condition of the vegetation is about the worst it had been for many years, while a value close to the maximum (‘excellent’) indicates some of the best vegetation conditions recorded. The normal category indicates an average vegetation condition for that area. This product is under development.

For better interpretation and understanding of the NDVI images, the deviation from the long-term mean is also provided. The NDVI deviation describes the amount and direction (positive or negative) of change of the current time period compared to the long-term mean NDVI (2001 to 2010) calculated for the corresponding time period. For example, the NDVI values for 1 to 15 January 2015 will be compared to the average of previous NDVI values from 2001 to 2010 for the first half of January. It therefore offers a good indication of how the current conditions compare with average conditions of the same time of year for many years.

Because most of Namibia’s rangelands experience very distinctive rainfall and dry seasons, the Cumulative Seasonal NDVI product is provided. This calculates the average NDVI for each season starting in September up to the end of May for each year. This product is updated twice a month during the growing season to provide an overview of how the current season is developing. This product is still in development.

The Vegetation Condition Index (VCI) is an indicator of the current activity of the vegetation relative to the historical range (minimum and maximum NDVI values) calculated for the corresponding time from archive data (2000 to present). The VCI thus normalizes the NDVI according to its variability measured over many years and results in a consistent index for various land cover types. This means that different land cover types can be compared in terms of how the current condition compares to the minimum-maximum range recorded over many years for that same area. The VCI is considered a better indicator of water stress than the NDVI on its own.